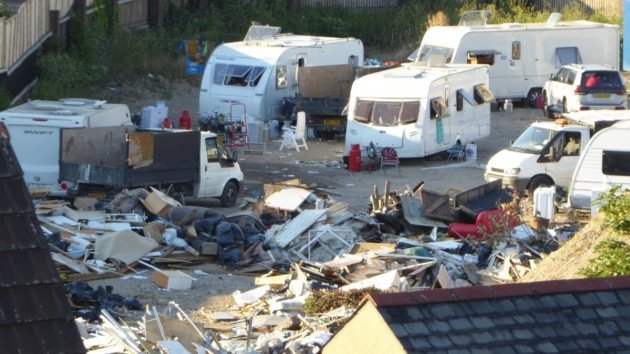 When travellers set up illegal encampments on a vacant site, this can cost the landowner thousands in legal fees to have them removed. This in itself is inconvenient enough, but there are huge cleanup bills afterwards to remove the waste that’s often left behind.

In the past this has included asbestos, refrigerators, used engine oil, gas cylinders and other hazardous materials.
These then incur further costs to dispose of in a responsible way. Entry to vacant sites is often gained by cutting the locks on gates or demolishing fences overnight when intrusion is less likely to be noticed by anybody. This is especially true for remote locations including demolition sites and commercial premises.

It is often the case that landowners are only made aware of the encampments several days after the initial
break-in, which further delays the action that can be taken. Many of these sites do not have CCTV or regular security patrols either.

Because trespassing is a civil matter, the police are reluctant to become involved except in extreme circumstances. This can often leave the landowner with nobody but the courts to turn to, which can take weeks or even months before any enforcement action can take place.

Meanwhile, the land is unusable by the landowner. It cannot be leased or sold, and in some cases this can delay planned construction works which can result in further financial penalties for missed deadlines.

Overall, it creates an almighty headache for all those involved.

At Detection Technologies, we have developed the technology to detect when a perimeter is breached, whether it is a fence, a gate or a wall. Our VibraTek sensor cable can be placed along almost any type of fence, including gates, and the VibraSector analyser will constantly monitor the sensor cable for any instances of intrusion.
This includes the cutting of a fence, intruders climbing over, or if the sensor cable itself is damaged or cut.
For walls, our VibraFon sensors can be placed within the wall itself, and act in the same way as the VibraTek sensor cable; they are constantly monitored for anything which could be an act of intrusion on to your site.
This will monitor for anybody climbing over the wall, or placing climbing aids such as ropes and ladders against the wall.

As well as the constant digital monitoring of these sensors, when an intrusion is detected, you will be able
to listen to the live audio which is picked up from the sensors. This will allow you to determine the nature of the intrusion as if you were listening from the fence itself. Once you have determined what has caused the alarm, you can then decide the appropriate action to take, whether you call the police or deploy your own security team to the site.

In addition to this, security lights, sirens and other devices can be triggered from a perimeter intrusion alarm, making it known to the trespassers that they have not entered undetected and draw attention to the site.
This can be much more effective at preventing intruders than a CCTV system alone.

Furthermore, our VibraTek sensor cable can also be supplied with a stainless-steel armoured jacket which further reduces the likelihood of it being cut or damaged by intruders.

Contact us today to discuss how Detection Technologies can protect your site from trespassers.